Weekend Update is a news segment on Saturday Night Live. It has previously been known as Saturday Night NewsLine (on the March 7, 1981 episode), SNL Newsbreak (season 7), and Saturday Night News (seasons 8-10). It occurs in every episode of SNL, commenting on or parodying current events as a 'fake news' sketch with one or two cast members pretending to be anchors, reading the week's important news headlines (and a few weird stories) and deadpanning a joke about each. "Guests" played by other cast members tend to show up and talk with the anchor(s). At various times, especially in the 1980s/early '90s, sets and graphics were modeled closely after contemporary NBC News branding while at other times a more unique/generic look was sought.

Weekend Update was created by original anchor Chevy Chase and SNL writer Herb Sargent, and appeared on the first SNL broadcast on October 11, 1975. Chase popularized several catch phrases during the segment, such as his "I'm Chevy Chase and you're not" greeting; and his repeated announcement that "Generalissimo Francisco Franco is still dead". When Weekend Update begins, Chase was consistently on the phone presumably talking to his lover, and would talk until realizing he was "on air."

In addition, the practice of a picture insert of a person simultaneously giving the news read in sign language for the hearing impaired—common in the days before closed captioning—was parodied by Garrett Morris. Chase would sometimes repeat the top story at the end of the segment, while Morris simply cupped his mouth and shouted the headline loudly. He would also end the segment with the line "That's the news, goodnight and have a pleasant tomorrow."

The first Weekend Update "guest" appeared during this time, an editorial by Emily Litella (portrayed by Gilda Radner). John Belushi would also frequently appear as himself, in some sort of newsroom-style capacity (giving editorials or appearing as the "weather man").

Chevy Chase was the Weekend Update anchor when the show first started.

Jane Curtin on-set with Chase. She replaced him after his departure.

Chase was present for first show of season 2. He missed the next two episodes, however; Jane Curtin filled in for him. Chase returned to the show but only stayed for a couple more episodes before leaving for good. His last episode as a cast member was the October 30, 1976 episode; starting on the following episode, Curtin was named his permanent replacement, and the segment became Weekend Update with Jane Curtin.

Curtin anchored solo for the remainder of season 2. She was paired with Dan Aykroyd for season 3, and Bill Murray in seasons 4 and 5.

Bill Murray now with Jane for Seasons 4 and 5.

Following the departure of the entire cast at the end of season 5, new producer Jean Doumanian built a new cast, and installed Charles Rocket as anchor. Rocket anchored five episodes solo before being teamed with Gail Matthius for another six, with the transition taking place over Christmas break.

The tenth episode, February 14, 1981, was notable for having three news segments with two names- the regular Update with Rocket and Matthius, plus two segments entitled Newsbreak with Eddie Murphy. Murphy sat in front of the Update backdrop, sans the maps and screen.

The twelfth episode of the season, broadcast March 7, 1981, featured a one-time name change to Saturday Night NewsLine. NewsLine consisted of three segments scattered throughout the show: Mark King, as Dr. Jonathan Lear, talked about DNA in the science segment. Bill Murray, who hosted the episode, appeared as "arts and leisure correspondent", discussing the upcoming Oscars. Charles Rocket anchored the third segment solo as a typical, albeit shortened, Weekend Update-style segment. The set used for NewsLine included the Update backdrop and Eddie Murphy-Newsbreak rear desk, plus a new world map and side screen.

NewsLine took place on the second-to-last episode of the season. Afterward, Jean Doumanian was fired as executive producer. Dick Ebersol succeeded her, and immediately fired most of the cast, including Rocket. For what would be the last episode of the season, Chevy Chase hosted, and the segment was billed as Weekend Update with Chevy Chase. It was done in the same style as the first season, including the original set.

Title card used for the Chevy Chase WU, April 11, 1981. It also appeared on the background screens on the early Rocket-only broadcasts from that season.

At the start of season 7, the segment was renamed SNL Newsbreak, and was hosted by Brian Doyle-Murray. At different times, Murray would host solo, or be joined by Mary Gross and/or Christine Ebersole. Initially, the segment began with a gag wherein the word "break" in the superimposed "SNL Newsbreak" title would explode when struck by lightning, and pieces of the letters would rain down upon Murray's head. This gag was later dropped. 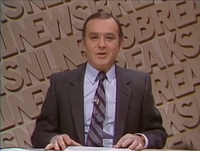 Falling letters
The first edition of SNL Newsbreak, October 3, 1981. An example of the "falling letters" gag.

Murray was let go at the end of the season, and the segment changed names again. Initially, it was Saturday Night News with Brad Hall. Hall was pulled off of Weekend Update after a season and a half. For another year, the anchor position rotated, starting with Don Rickles on the January 28, 1984 episode. Halfway through season 10, Christopher Guest took over as permanent anchor. He began on the December 1, 1984 episode and remained until the end of the season.

Notably, the December 8 episode from this season had no news segment; it is the only episode in the shows history to not have one.

Dick Ebersol departed the show after season 10, taking the remaining cast members with him. Lorne Michaels returned as producer, and the name returned to Weekend Update. From the new cast, Michaels installed Dennis Miller as anchor. Miller remained until the end of season 16, giving a final goodbye on the May 18, 1991 episode.

Following Miller's departure, Kevin Nealon was installed as anchor. He had previously done segments on Weekend Update, notably Mr. Subliminal. He stepped down as anchor because he wanted to perform in more sketches, which he found impossible while anchoring Weekend Update. 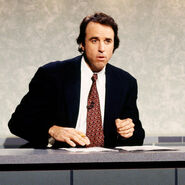 Norm MacDonald was chosen to replace Nealon. He took over at the beginning of season 20. His constant references to the O. J. Simpson murder case created friction between Michaels and NBC executive Don Ohlmeyer; Ohlmeyer eventually forced MacDonald off Weekend Update as a result. His last episode as anchor December 13, 1997; he remained on the show for a few more episodes before leaving. 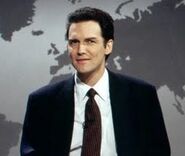 MacDonald was replaced by Colin Quinn; Quinn had been a frequent commentator on the MacDonald-era Weekend Update. Quinn started on the January 10, 1998 show, and gave the following humorous opening to explain his sudden ascension to the position:

"You know how you go to your favorite bar, and your local bartender isn't there? You ask, 'Where's Jeff?' ... 'Jeff no longer works here, I'm Steve.' And you're thinking, 'Hey, who's this idiot? I like Jeff.' But you still want your drink? And even though Steve doesn't mix your drink the same way you're used to, like Jeff, you still like the same bar. You don't want to have to go to a different bar. And even Steve might feel kinda bad, because Jeff trained him. Jeff showed him how to work the cash register, where the tonic was on the soda gun, who tips, who doesn't... Well, I'm Steve. What can I get you?"

Quinn left the show at the end of season 25.

Following Quinn's departure, the show switched to a two-anchor format. It was initially known as Weekend Update with Jimmy Fallon and Tina Fey. This lasted until Fallon left the show at the end of season 29; he gave a goodbye to the audience on the May 15, 2004 show.

Starting with season 30, the segment became Weekend Update with Tina Fey and Amy Poehler. Fey missed the first three shows of season 31 due to maternity leave; Horatio Sanz anchored alongside Poehler, though the name of the segment remained unchanged. Fey and Poehler remained co-anchors until Fey left the show at the end of season 31.

The segment became Weekend Update with Amy Poehler and Seth Meyers at the beginning of season 32. The first episode of the season, airing September 30, 2006, began with NBC anchor Brian Williams entering and sitting at the desk, believing himself to be Fey's replacement, until Poehler breaks the news and Meyers enters. Poehler left halfway through season 34; her last episode was December 13, 2008.

Tina Fey and Jimmy Fallon anchored together until Season 29.

Horatio Sanz was temporarily anchored with Amy Poehler in the first two episodes of Season 31.

After Tina left, Seth Meyers came to anchor with Amy.

In one episode, Tina, Jimmy, Seth, and Amy are all together sitting at the desk.

The title card used during the Fey/Poehler/Sanz era from 2004-06.

The title card used during the Poehler/Meyers era from 2006-13.

Following Poehler's mid-season departure, Seth Meyers took over as sole anchor, with the name of the segment becoming Weekend Update with Seth Meyers. This remained the setup until the end of season 38. Meyers now holds the record for the longest tenure on the show with seven seasons; Fey and Miller are tied for second with six.

During season 38, it was announced that Meyers was chosen to replace Jimmy Fallon on NBC's Late Night, as Fallon was moving to the Tonight Show.[1] This necessitated changes for season 39.

Prior to the start of season 39, it was announced that Cecily Strong would co-anchor Weekend Update alongside Meyers, until his departure.[2] The changes in late night programming were scheduled for February of 2014, when The Tonight Show, Late Night, and SNL all had to go on hiatus for the 2014 Winter Olympics. Meyers' last show was February 1, 2014; when it returned a month later head writer Colin Jost was added the cast in his place, joining Strong at the desk. Jost's anchoring Weekend Update marks the first time since Brian Doyle-Murray in season 7 that a person was added to the cast only to anchor the news segment, without taking part in any sketches. 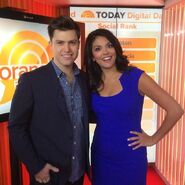 The title card used during the Meyers/Strong era from 2013-14.

The title card used during the Strong/Jost era in 2014.

Prior to the start of season 40, it was announced that Strong had been dropped from the Update desk, and writer Michael Che would be promoted to the cast to anchor alongside Jost. Jost and Che have hosted Weekend Update together since then (as of season 46).

This is the second anchor person to start "Colin" as the first name in Colin Jost. The first being Colin Quinn.

Norm Macdonald is the only anchor to end Weekend Update early when realizing it's peaked.

START OF SPIEL: "For Weekend Update..."

REST OF SPIEL: ..."Good night and have a pleasant tomorrow." - Weekend Update anchor (2000-2006, taken from Chevy Chase and Jane Curtain from above)