Elizabeth Stamatina "Tina" Fey (born May 18, 1970) is an American actress, comedian, and former cast member of Saturday Night Live. During her tenure on the show, she was co-anchor of Weekend Update as well as the show's head writer. Because of this, she rarely appeared in any sketches. She returned to host 5 times the first being on February 23, 2008, the second being on April 10, 2010, the third being on May 7, 2011, fourth being September 28, 2013, and the fifth being December 19, 2015 with her longtime friend and Weekend Update co-anchor, Amy Poehler. She is the third woman to join the Five-Timers Club, and the first female cast member.

Fey is married to composer Jeff Richmond, who wrote the music for her sitcom 30 Rock. They have two daughters together: Alice Zenobia and Penelope Athena Richmond, born September 10, 2005 and August 10, 2011 respectively. 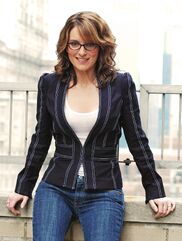 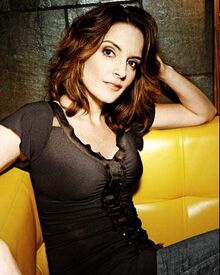 Add a photo to this gallery
Retrieved from "https://snl.fandom.com/wiki/Tina_Fey?oldid=33021"
Community content is available under CC-BY-SA unless otherwise noted.