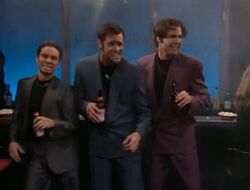 The Roxbury Guys was a recurring sketch on Saturday Night Live which involves two brothers named Doug (played by Chris Kattan) and Steve Butabi (played by Will Ferrell) (although their names and relationship to one another were never revealed until the subsequent release of the film) who always got dressed up in rayon suits to go clubbing, where they would attempt to pick up women. Their trademark was bobbing their heads in unison to the song "What Is Love" by Haddaway, which always played throughout the duration of each sketch. They were extremely unfortunate with the women at the clubs, often gyrating against them in an attempt to get them to dance, but always causing a negative reaction. The sketches often featured a third member of the group, similar to the others in appearance and actions, performed by that week's host, such as Tom Hanks, Martin Short, Jim Carrey, Alec Baldwin and Sylvester Stallone whose character was usually credited as "Barhop."

This sketch was the basis for the 1998 movie A Night at the Roxbury.