2014-present
Peter Michael Davidson (born November 16, 1993) is an American stand-up comedian and actor, who joined the cast of Saturday Night Live for season 40. Before SNL, Davidson was a cast member of MTV shows such as Wild 'N Out, Guy Code, and Failosophy. Davidson also had a minor role in the comedy film School Dance, directed by Nick Cannon.

Davidson was born in Staten Island, he is the son of Amy (Waters) and Scott Davidson. His father was a firefighter who died in the September 11th attacks. Davidson majored in comedy at the age of 16, when he and his friends were in a Staten Island bowling ally. Following high school, he attended St. Francis College in Brooklyn, New York. 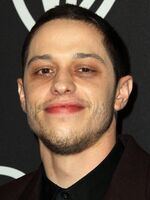 Add a photo to this gallery

Retrieved from "https://snl.fandom.com/wiki/Pete_Davidson?oldid=42475"
Community content is available under CC-BY-SA unless otherwise noted.