2014-2019
Leslie Jones (born September 7, 1967) is an American comedienne, actress, and writer who was a featured player on Saturday Night Live, beginning in Season 40, and was prompted to repertory status in Season 42. She left the show at the end of Season 44, after five seasons in the cast, to pursue her movie career, and for the show Supermarket Sweep.

Jones was added at Christmas break in season 39, when press controversy lead to a push to hire more black women on the show; after auditioning to join the cast, she and LaKendra Tookes were added as writers, while Sasheer Zamata was added to the cast. She did several uncredited cameos, including two appearance as herself on Weekend Update, in season 39 and 40. She was added to the cast for the fourth episode of season 40. 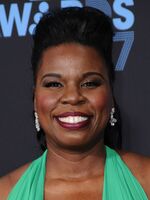 Title card used for season 44
Add a photo to this gallery
Retrieved from "https://snl.fandom.com/wiki/Leslie_Jones?oldid=39870"
Community content is available under CC-BY-SA unless otherwise noted.