Fear is an American punk band. They were banned from SNL after an appearance as musical guest on the 1981 Halloween episode. With Donald Pleasence as host, the band played that night by request from Fear fan John Belushi, and they proceeded to play "Beef Bologna" and "New York’s Alright If You Like Saxophones" when they weren't dodging their bussed-in "dancers." The band (and dancers who got ahold of a microphone) also used obscene language, singer Lee Ving told the crowd, "Thank you very much, it's great to be here in New Jersey," and the dancers destroyed the set with their slam dancing onstage. The situation was out of control to the extent that Dave Wilson chose to end the three-song performance by cutting the audio and video to a commercial as they started to play "Let's Have a War," due to his fear of damage to studio equipment. 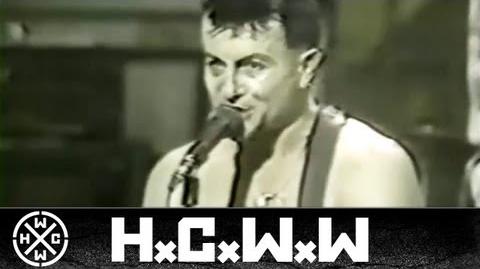 This article is a stub. You can help the Saturday Night Live Wiki by expanding it.
Community content is available under CC-BY-SA unless otherwise noted.
Advertisement