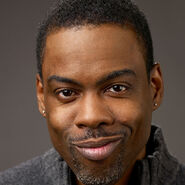 Jimmy Fallon as Chris Rock on the March 11, 2000 episode during the "Regis Auditions" sketch.

Jay Pharoah as Chris Rock on the October 1, 2011 episode during the "Rock's Way" sketch.
Add a photo to this gallery
Retrieved from "https://snl.fandom.com/wiki/Chris_Rock?oldid=40932"
Community content is available under CC-BY-SA unless otherwise noted.