After graduating high school, Farley studied some drama, but found his niche in comedy when an undergraduate at Marquette University. After graduating college, Chris Farley moved to Chicago. Farley auditioned for the famous Second City comedy troupe, but failed. Farley then auditioned for ImprovOlympic, also in Chicago, and was granted a probationary term. Early in his ImprovOlympic run Farley had gained a reputation for outlandish stunts and winning over audience members. Eventually sharpening his drama skills to work together with a troupe, Farley had auditioned for Second City a second time and succeeded. As Second City has often been considered a "launch pad" for SNL cast, it seemed likely Chris Farley would be on the cusp of the "big one", garnering the attention of talent scouts. Farley auditioned for SNL in 1989 and was granted junior cast member status for the 1990 season. Two years later, he was promoted to full cast status, which is rare to accomplish in so short a time.

On Saturday Night Live, Farley frequently collaborated with his fellow cast members David Spade, Adam Sandler, Chris Rock, and Rob Schneider, among others. This group, along with Norm Macdonald, came to be known as the "Bad Boys of SNL." He also worked with Tim Meadows when they were working at Second City and on SNL. Popular characters performed by Farley included an exaggerated version of himself on "The Chris Farley Show," a sketch involving a talk show in which Farley quite often "interviewed" the guest, got very nervous and asked simple-minded or irrelevant questions, such as what their favorite rock band was; Matt Foley, an over-the-top, thrice-divorced motivational speaker who constantly reminded other characters that he "lived in a van down by the river;" Todd O'Connor of Bill Swerski's Superfans, a group of stereotypical Chicagoans who practically worshipped Mike Ditka and constantly shouted "da Bears!;" a Chippendale's dancer, in an infamous sketch that paired him with guest host Patrick Swayze; one of the "Gap Girls ," who hung out together at a local mall; a stereotypical lunch lady, to the theme of Lunch Lady Land performed by Adam Sandler; and Bennett Brauer, a Weekend Update commentator who often divulged his personal and hygienic problems through air quotes.

During his five years on SNL, Chris developed a very close relationship with castmate David Spade. The two would go on to star together in Tommy Boy (1995) and Black Sheep (1996). They were inseperable for several years, joking that they were "like a married couple." When David didn't attend Chris's funeral, many speculated there had been a fight. Spade later rebuked these rumors, saying that he had stayed good friends with Chris until the end, and that the reason for declining to attend Farley's funeral was that he was too emotional, being unable to accept the loss of his famous co-star.

Farley also hosted SNL once, just two months before his death, on October 25, 1997. The episode was a disaster. He'd blown out his voice during the rehearsals, so he was extremely hoarse for the live show, and it was obvious that his health was declining dramatically. The cold open, in which he, Tim Meadows, and Chevy Chase try to convince Lorne Michaels that he was in good enough shape and was sober enough to host, was exactly the opposite of what was happening, and is cut in reruns along with the monologue.

On December 18, 1997, Farley was found dead by his younger brother John in his apartment in the John Hancock Center in Chicago. An autopsy concluded that Chris Farley passed away hours before his body was identified by his brother, presumably the early morning of December 18th, and the cause of death was ruled an overdose of morphine and cocaine (known in slang as a "speedball") which had parylzed his cardiovascular muscles. Farley's poor health was a likely stimulant that acted in tandem with the speedball, as advanced atherosclerosis was cited as a "significant contributing factor." Farley's death is often compared to that of his SNL idol John Belushi, who also died at age 33 of an accidental drug overdose consisting of cocaine and heroin, and who had been an inspiration for Chris Farley to begin his comic career.

Two memorials were held for Farley, one a small, private wake under heavy security (to ensure privacy) attended by the Farley family and Chris' schoolfriends in his birthplace of Madison, Wisconsin. The second funeral was done in California and was attended by over five hundred people, to include many of Chris Farley's co-stars and fellow comics such as Adam Sandler, Tim Meadows and Phil Hartman (who would have his own funeral several months later). Tom Arnold, whom Chris Farley had impersonated on SNL, gave the eulogy at the funeral. The only one of the Bad Boys who declined to attend was Farley's movie sidekick and best friend David Spade, who admitted it was too difficult for "me to be in the same room where Chris was in a box".

The films Dirty Work and Almost Heroes, which were released shortly after his death, were dedicated to Chris Farley, who had acted in both of them.

Prior to Farley's death, he had auditioned and recorded nearly every line for the role of Shrek, a role which eventually went to his SNL costar Mike Myers, who used a variant of his "All Things Scottish" character.

Farley was posthumously awarded the 2,289th star of the Hollywood Walk of Fame on August 26, 2005, which is located at 6366 Hollywood Blvd., in front of iO West. The ceremony was notably attended by his family, David Spade, Adam Sandler, and Chris Rock. 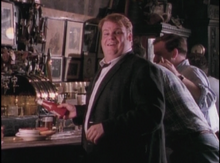 Farley in the opening montage 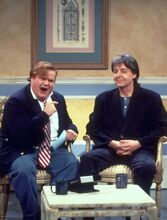 With Paul McCartney during The Chris Farley Show sketch 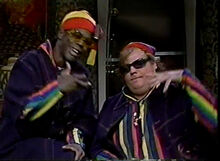 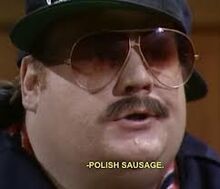 As Todd O'Connor in the Superfans sketch 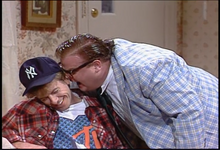 With David Spade in a Matt Foley, Motivational Speaker sketch

As Lori Davis in the Focus on Beauty 2 sketch 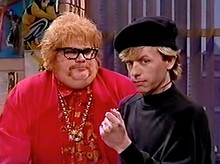 Chris and David Spade in the Danté sketch

Chris dancing as Barney in the Chippendales sketch

In the "Hosting Alone" cold opening 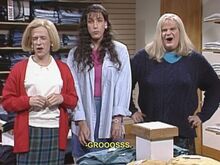 With David Spade and Adam Sandler as the Gap Girls

With Jeff Daniels in the Chris Farley Show sketch
Community content is available under CC-BY-SA unless otherwise noted.