The cast of Saturday Night Live has included many actors and actresses. Since the show's fifth season, the cast has been divided into upper and lower groups, with cast members often promoted up.

The Not Ready for Prime Time Players[]

Main article: The Not Ready for Prime Time Players

The original cast was called The Not Ready for Prime Time Players, a name intended to mock Howard Cosell's "Saturday Night Live", whose cast members were known as the "Prime Time Players". This designation was dropped for the show's fourth season.

For the show's fifth season, the "Featured Players" cast tier was created (see below), and after the departures of the original cast at the end of that season, this two-tier structure would be maintained by new producer Jean Doumanian. The term Repertory Players came to be applied to the upper tier of cast members, to differentiate them from the Featured Players.

The Featured Players are the lower tier of cast members.

The separate grouping was created for season five. At the end of the previous season, Dan Aykroyd and John Belushi had departed, and Michaels decided to also create a lower tier of cast members for bit parts. Previously, writers had played these parts uncredited, and indeed, most of the new credited featured players were long-time writers on the show. During the season, Harry Shearer was promoted to Repertory status; he was the first featured player ever promoted, and the only person to be promoted when original cast members remained on the show.

Some lists erroneously list Al Franken and Tom Davis as featured players in season 3 and season 4. While they were intermittently credited as special guests (as the duo "Franken & Davis") during that time, their performances were more on par with Michael O'Donoghue's standup performances during that time, not in the vein of future featured players.

When Doumanian took over the following year, she decided to keep this two-tier system. While the entire cast was new, she placed the actors into separate categories. Eddie Murphy became the second person promoted from featured status during that season. After Doumanian's firing, new producer Dick Ebersol made little use of the featured player category, with only one in season 7 (Brian Doyle-Murray, a featured player in season five and writer under Doumanian), and none in the following three seasons. When Lorne Michaels returned for season 11, he did as Doumanian had done in the sixth season and placed his new cast into two groups, thus cementing the system.

From Michaels return into the 1990s, featured players were only credited when they were scheduled to appear; in any given episode, only some of the featured players on the cast roster would appear in the opening montage. The Saturday Night Live Band with the current musical director (initially G.E. Smith, and later Lenny Pickett), would also be listed at the end of the Featured Players list during these seasons.

Seasons 16-18 used a system of dividing the cast into three groups. The new middle group didn't have an official name; announcer Don Pardo simply prefaced the first name with the word "with" and listed them alphabetically after the repertory cast, while variously using "with" or "starring" to introduce the repertory players. These cast members were shown in video clips and were credited in every episode, like the repertory cast but unlike the featured players, who were shown in still photos and credited only if they were scheduled to appear.

When the category was created, it was comprised two new cast members, Chris Farley and Chris Rock. Farley and Rock had been hired to replace the departing Jon Lovitz and Nora Dunn, who had departed the previous year; their departures were the first of repertory cast members since the big changeover between seasons 11 and 12. After season 18, all five members of the middle category were promoted to repertory status. 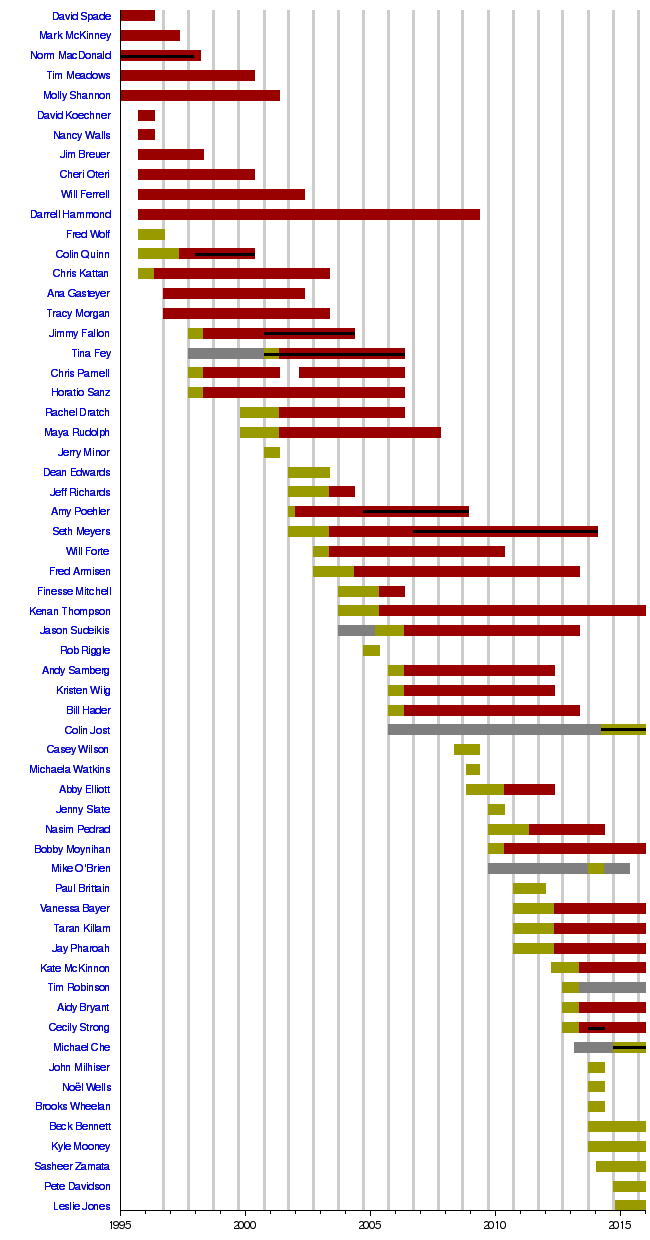 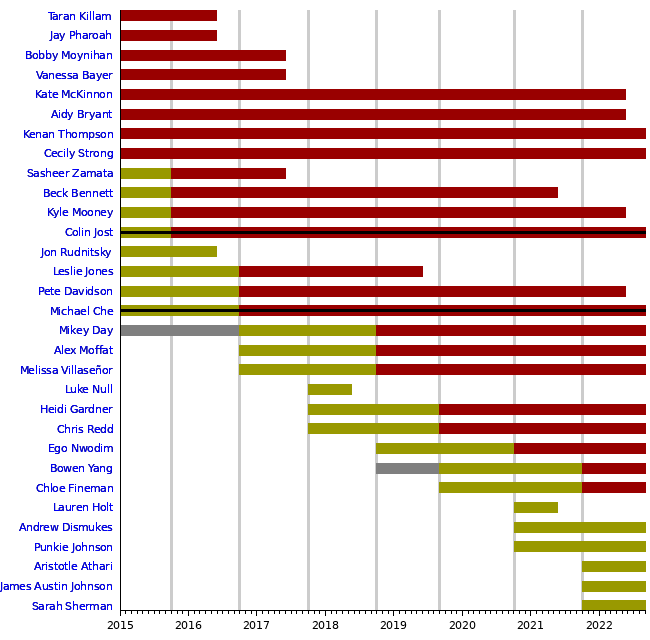